Foto Friday ~ Don't give up 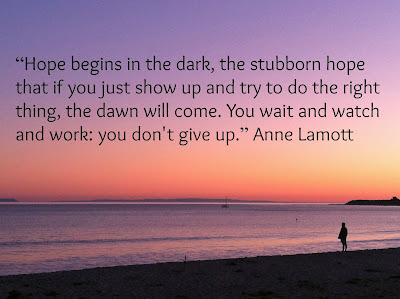 “Write. Start writing today. Start writing right now. Don’t write it right, just write it –and then make it right later. Give yourself the mental freedom to enjoy the process, because the process of writing is a long one. Be wary of “writing rules” and advice. Do it your way.” ― Tara Moss 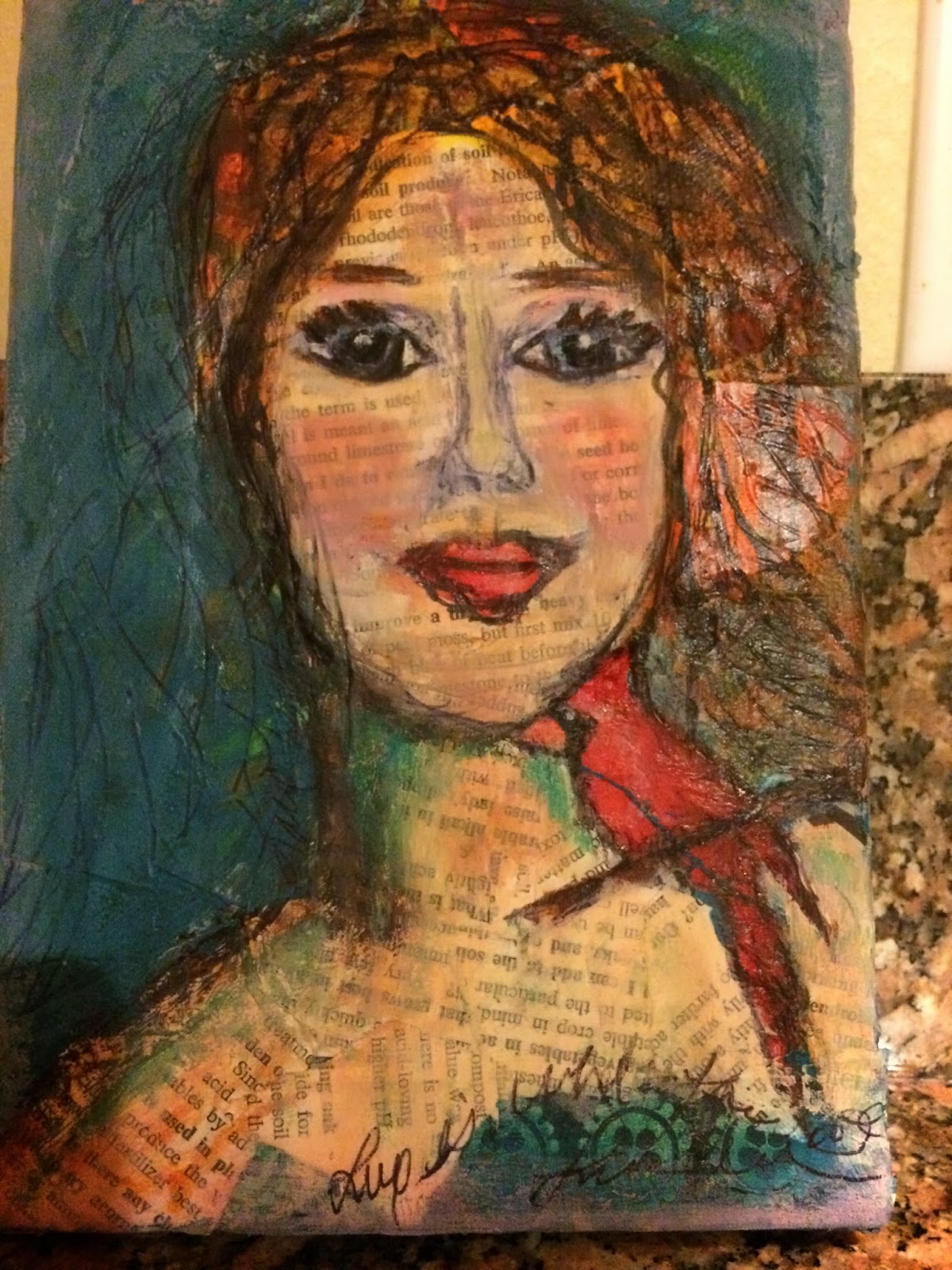 ALA announces the 2014 winners

** John Newbery Medal for the most outstanding contribution to children's literature:

** Randolph Caldecott Medal for the most distinguished American picture book for children:

“Locomotive,” illustrated by Brian Floca, is the 2014 Caldecott Medal winner. The book was written by Brian Floca and published by Atheneum Books for Young Readers, an imprint of Simon & Schuster Children’s Publishing.

“P.S. Be Eleven,” written by Rita Williams-Garcia, is the King Author Book winner. The book is published by Amistad, an imprint of HarperCollins Publishers.

“Knock Knock: My Dad’s Dream for Me,” illustrated by Bryan Collier, is the King Illustrator Book winner. The book was written by Daniel Beaty and published by Little, Brown and Company, Hachette Book Group.

“When the Beat Was Born: DJ Kool Herc and the Creation of Hip Hop,” illustrated by Theodore Taylor III, is the Steptoe winner. The book is published by Roaring Brook Press, a division of Holtzbrinck Publishing Holdings Limited Partnership.

“Midwinterblood,” written by Marcus Sedgwick, is the 2014 Printz Award winner.

** Schneider Family Book Award for books that embody an artistic expression of the disability experience:

“A Splash of Red: The Life and Art of Horace Pippin,” written by Jen Bryant, illustrated by Melissa Sweet
“Handbook for Dragon Slayers,” written by Merrie Haskell

The teen (ages 13-18) award winner is “Rose under Fire,” written by Elizabeth Wein and published by Hyperion, an imprint of Disney Book Group.

** Alex Awards for the 10 best adult books that appeal to teen audiences:

** Margaret A. Edwards Award for lifetime achievement in writing for young adults:
Markus Zusak is the 2014 Edwards Award winner. His books include: “The Book Thief” and “I Am the Messenger,” published by Alfred A. Knopf, an imprint of Random House Children’s Books, and “Getting the Girl” and “Fighting Ruben Wolfe,” published by Arthur A. Levine, an imprint of Scholastic.

** YALSA Award for Excellence in Nonfiction for Young Adults:
“The Nazi Hunters: How a Team of Spies and Survivors Captured the World’s Most Notorious Nazi,” written by Neal Bascomb, is the 2014 Excellence winner. The book is published by Arthur A. Levine Books, an imprint of Scholastic Inc.

Four other books were finalists for the award:
“Go: A Kidd’s Guide to Graphic Design,” written by Chip Kidd
“Imprisoned: The Betrayal of Japanese Americans During World War II,” written by Martin W. Sandler
“Courage Has No Color: The True Story of the Triple Nickles, America’s First Black Paratroopers,” written by Tanya Lee Stone
“The President Has Been Shot! The Assassination of John F. Kennedy,” written by James L. Swanson
- January 28, 2014 1 comment:

The Junction of Sunshine and Lucky by Holly Schindler BLOG TOUR and GIVEAWAY! 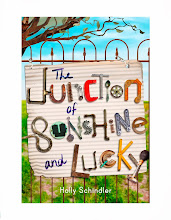 What is the elevator pitch of your newest book?
“Beasts of the Southern Wild” meets Because of Winn Dixie in this inspiring story of a young girl who finds her “shine,” one recycled sculpture at a time.

The longer synopsis:
August “Auggie” Jones lives with her Grandpa Gus, a trash hauler, in a poor part of town. So when her wealthy classmate’s father starts the House Beautification Committee, it’s homes like Auggie’s that are deemed “in violation.” Auggie is determined to prove that she is not as run-down as the outside of her house might suggest. Using the kind of items Gus usually hauls to the scrap heap, a broken toaster becomes a flower; church windows turn into a rainbow walkway; and an old car gets new life as spinning whirligigs. What starts out as a home renovation project becomes much more as Auggie and her grandpa discover a talent they never knew they had—and redefine a whole town’s perception of beauty, one recycled sculpture at a time. Auggie’s talent for creating found art will remind readers that one girl’s trash really is another girl’s treasure.

Do you eat or listen to music while writing?
I’m never without coffee as I write.  I ALWAYS have a cup nearby—on my desk or reheating in the microwave.
If I’m running through a final draft or doing something nitpicky like copyediting, I do much better with relative silence—I like to get in my office, away from any distracting noises.  But if I’m drafting, I like to sit on the couch in the midst of household comings and goings, or even in front of the TV.  (Favorite shows to write to are the news, a movie (I’m a serious old movie buff), or even classic TV shows I loved as a girl.  Something about chatter can fuel me as I draft.
Music’s tougher.  I’m getting better about listening to music while I work.  I’m a music junkie, though—I can often get so wrapped up in what I’m listening to, it can be a real distraction.  Sometimes, if I’m not careful, I can even start typing lyrics!

What is your favorite food?
Donuts.  Love me some jellies.  And Mexican food.

Do you have pets?
I’ve always had pets.  Growing up, I had two cats and a Maltese I loved desperately.  Right now, I’ve got a completely spoiled Pekingese, Jake.  He’s also always nearby when I’m writing—either at my feet while I’m in my office or next to me on the couch, snoring while I type away.

What’s your favorite season?
I used to really love summer.  But the past few years, our summers here in Missouri have been full of 110-degree days.  That’s just too much!  I’d have to say that I’m a spring girl…tulips are my favorite flower, and I’ve always loved hats—bring on the Easter bonnets!  (If only we wore fascinators in the States…)

What was the book that turned you into a reader?
THE PAIN AND THE GREAT ONE by Judy Blume.  I’m a child of the ‘80s, so I grew up on Blume’s books—I started out with picture books like THE PAIN and graduated to chapter books, then teen novels.  THE PAIN just seemed so perfect when I first read it—I have a brother who’s a year younger than me, and it was the first time in my life when I absolutely identified with a book; the first time I felt as though a book was telling my story.  Once you have that feeling—like somebody else gets it—you’re hooked for the rest of your life…

Are you a night owl or early bird?
I don’t really like to work at night.  I prefer to get up and get to it.  I like to give full attention to my writing.  If I wait until late in the day, I’m not as fresh, and I’m usually thinking about things that happened earlier that day.  Those thoughts kind of compete with my words…

What do you never leave home without?
My dog.  My Kindle.  Something to write bursts of ideas on.

What piece of advice would you give aspiring writers?
NEVER GIVE UP.  Never, never, never, never.  Not on your first deal, not on a book.  I’ve never had a book that was published quickly or easily.  Though I published short fiction, poetry, and literary critique early on, it took seven and half years of full-time effort to land my first book deal.  THE JUNCTION OF SUNSHINE AND LUCKY actually started out as a picture book back in ’05.  But editors all thought the concept of folk art was too advanced for picture book readers.  So I reinvented it as a middle grade novel.  There’s never a dead-end with a project.  I honestly believe that.

What are your writing goals for 2014?
I’ve got a ton of work to get done.  I have seven books (that are either outlined or drafted) to whip into shape.  I’ll also be making some announcements regarding my next YA, FERAL, which will release with HarperCollins soon!  Keep up with the latest by following along at my author blog: hollyschindler.blogspot.com.  You can also find the latest at my author site: hollyschindler.com.

Reviews:
"...a heartwarming and uplifting story...[that] shines...with vibrant themes of community, self-empowerment and artistic vision delivered with a satisfying verve." – Kirkus Reviews
"Axioms like 'One man's trash is another man's treasure' and 'Beauty is in the eye of the beholder' come gracefully to life in Schindler's tale about the value of hard work and the power of community…Auggie's enthusiasm and unbridled creativity are infectious, and likeminded readers will envy her creative partnership with [her grandfather] Gus." – Publishers Weekly

Site for young readers: Holly Schindler’s Middles - hollyschindlermiddles.weebly.com.
I’m especially excited about this site.  I adored getting to interact with the YA readership online—usually through Twitter or FB.  But I had to create a site where I could interact with the MG readership.  I’m devoting a page on the site to reviews from young readers themselves!  Be sure to send your young reader’s review through the Contact Me page.
Group Author Blogs: YA Outside the Lines (yaoutsidethelines.blogspot.com) for YA authors and Smack Dab in the Middle (smack-dab-in-the-middle.blogspot.com) for MG authors.

THE JUNCTION OF SUNSHINE AND LUCKY Trailer:

I love the ELEVATED.
I love Elana.
I love Elegant people...
On the cover
(I couldn't think of another "E" word) 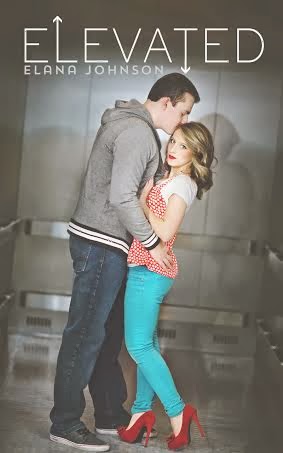 About ELEVATED: The last person seventeen-year-old Eleanor Livingston wants to see on the elevator—let alone get stuck with—is her ex-boyfriend Travis, the guy she's been avoiding for five months.

Plagued with the belief that when she speaks the truth, bad things happen, Elly hasn’t told Trav anything. Not why she broke up with him and cut off all contact. Not what happened the day her father returned from his deployment to Afghanistan. And certainly not that she misses him and still thinks about him everyday.

But with nowhere to hide and Travis so close it hurts, Elly’s worried she won’t be able to contain her secrets for long. She’s terrified of finally revealing the truth, because she can’t bear to watch a tragedy befall the boy she still loves.

Praise for ELEVATED:
"ELEVATED will take you on an emotionally gripping journey through the highs and lows of first love."
~Carolee Dean, author of Take Me There and Forget Me Not

"Poignant, raw, and intense, ELEVATED is a novel that will grip your heart and linger in your mind long after you turn the last page."
~Stasia Ward Kehoe, author of Audition and The Sound of Letting Go 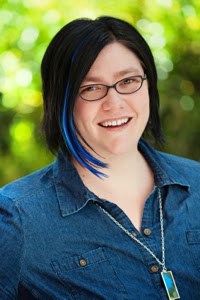 About Elana Johnson: Elana Johnson’s work, including Possession, Surrender, Abandon, and Regret, published by Simon Pulse (Simon & Schuster), is available now everywhere books are sold. Her popular ebook, From the Query to the Call, is also available for download, as well as a Possession short story, Resist. School teacher by day, Query Ninja by night, you can find her online at her personal blog or Twitter. She also co-founded the Query Tracker blog, and contributes to the League of Extraordinary Writers. 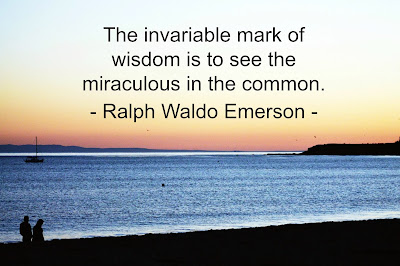