Christmas Kisses is a collection from five bestselling and award-winning authors. Set in the snowy town of Echo Ridge in upstate New York, these romances are sure to delight while you sip cocoa by the fire and listen to Christmas carols.

Someday Reese Gates will own The Candy Counter at Kenworth's; but someday can't come fast enough when the manager threatens to bring in a national candy provider. Reese secretly takes matters into her own hands hoping to save her parents from additional worry and prove herself capable of running the company. Her deception deepens as she ropes computer guru Andy Edwards into helping her expand the business. Reese wanted to shake things up, but she wasn't planning on her heart getting caught in the mix by Andy's stolen kisses. If she can hold it together until after Christmas, then she can reveal her successful online company and her feelings for Andy. Unfortunately for Reese, even the best laid plans can melt like chocolate. https://lucymcconnell.wordpress.com/ * https://www.facebook.com/ChristinaDymock?fref=ts

Christmas Makeover by Cami Checketts Amazon bestselling author Chelsea Jamison has been infatuated with Drew Stirling longer than she's loved playing basketball, high-top sneakers, and the Knicks. Unfortunately, all Drew sees is the kid who kicked his trash in the high school free throw contest and not the girl whose heart breaks into a fast dribble when he's near. Drew makes an unexpected visit home to Echo Ridge and their friendship picks up where they left off as they scheme to make a teenaged boy's Christmas dreams come true. When Chelsea realizes she's fallen for her best friend, she wonders if there is any hope of a relationship with Drew or if she's stuck in buddy-status for life. www.camichecketts.com * https://www.facebook.com/CamiCheckettsAuthor

Soda Fountain Christmas by Connie E. Sokol Amazon bestselling author Keira Kenworth has one focus this holiday season: save her father's old-time department store from bankruptcy. She is not focused on Tayton Wells, the tall, dark, and genius marketing guru from downtown New York, hired to make it happen. He is as doubtful that her nostalgic connect-the-town ideas will succeed as she is about his numbers-first plan. However, it's not just their different approaches that cause sparks to fly. Working together on a fast deadline to save the store before Christmas, the unspoken connection between them grows. But will the tough decisions they face drive them back to their separate worlds, or will they lead to the beginning of love? www.conniesokol.com * https://www.facebook.com/8basics?_rdr=p

Hope for Christmas by Rachelle J. Christensen Amazon bestselling &amp; award-winning author Anika Fletcher hates Christmas--its promises of good tidings and hope for the future are as tinseled as the ornaments on Kenworth's Hope Tree. Despite her feelings, Anika wants to maintain her daughter's faith in the magic of the season and gladly accepts a second job working with the handsome Carlos Rodriguez to restore Kenworth's old fashioned soda fountain. Carlos is no stranger to hard times and slowly shares his life of light and joy with Anika as they work together. Just as her fragile soul begins to feel hope again, an ill-timed act of charity changes everything. Anika isn't sure who she can trust or if hope is worth nurturing--especially at Christmas when it's easy to enjoy a kiss and believe love can last longer than the season. www.facebook.com/rachellechristensenauthor * http://rachellechristensen.com/

One Winter Night by Heather Tullis Amazon bestselling author Jonah Owens thought moving to Echo Ridge to open his art gallery would solve all of his problems. The need to sell his grandma's house adds an unexpected complication. It would be easier if his neighbor didn't have all those farm animals. Kaya Feidler's family has owned their land for nearly a hundred years--long before the neighbors were there. There's no way she's giving up the animal therapy business she's been struggling to make profitable. She gets a temp job helping Jonah in the gallery. Spending time together is a recipe for romance, but can they overcome their own hangups to be more than friends? http://heathertullis.com/ * https://www.facebook.com/HeatherTullisBooks

“Sterling Bridge” is an historical fiction film novel. It is largely based on the story behind the namesake that is Sterling Elementary in Tooele, Utah. Both commemorate how Sterling Harris championed the bridging of two towns.

With a Mormon mother and Catholic father, Joe Lacey, Jr. especially finds himself in the middle of a struggle between Catholic immigrants and Mormon settlers of the early days of Tooele, Utah. He is not the only one who doesn’t know where he belongs amidst the conflict, but on the verge of facing the adversity of becoming a teenager he’s not sure he’s the right man for the job of overcoming it. To take on the greater travails of a broken community, on the verge of its own heightening adversity, yet unaware of the Great Depression soon to hit, they need a bold leader who is aware of everyone’s needs.

When Joe is up against stacked odds of being the first to attempt integrating with an all Mormon student body, he has a pivotal decision to make, but he is afraid and naturally only thinks of his own predicament. Survival dictates a flight or fight response. Will he gamble with his future, continue to dodge his parents, lie, beg, borrow and even steal his way out of their higher expectations? Or will he let someone show him a better way? To do so he will have to stand up to the challenge posed by another outsider, a new larger than life football coach, who is willing to put it all on the line to integrate not just Joe Lacey, Jr., but the whole community. Both must learn how to strive for high moral ground without leaving any friends behind.

Coach Sterling Harris, aka “The Bridge Builder,” knows building relationships will be of most importance. He also knows Joe is at the center of it all. This young man will need to be a key player, if Sterling is going to be able to use the opportunity of playing winning football for the pride of a town, to bring an even greater good—blessing a community with harmony by curing ignorance and bringing education to the masses. 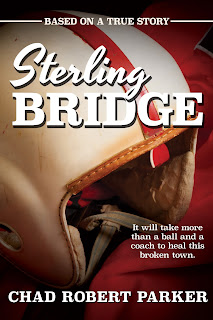 “Is that Joe Lacey over there?” Across the tracks now open to all of the boy’s view stood the austere man with the car, his hands cupped to his mouth to yell. His broad shoulders and bold stance made him look larger than life.
I did an about face. The other boys finished tackling each other into a pile.


“You know that guy?” Mike stood next to me. “What does he want with you?”
Sterling beckoned with a big swinging motion of his arm. But when I made no motion toward him, he then approached us, confidently crossing the tracks.
“I’ll be back,” I scurried toward him.
“Hey Joe, you gonna introduce me to your friends?” Sterling walked right by me.
“You’re not going to tell my parents, are you?” I held my hands out.
“What’s to tell? I can still give you that ride to school.” Sterling looked at his car.
“My friends don’t know I’m switching schools.” I spoke so only he would hear.
Sterling pivoted. With his back to my friends he offered me a deal. “If you win you’ll never hear from me again, but if I win you have to at least let me take you to school.”
Now I felt calm and casually strode over to huddle up certain I would never lose our bet. 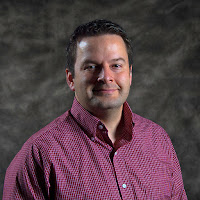 CHAD ROBERT PARKER lived in six states growing up, and is the second of six boys. Each served two-year missions for The Church of Jesus Christ of Latter-day Saints. He is the son of two great, humble parents. They taught him a love for family, church, and life. Chad is an avid sports fan and likes creating games. He also likes juggling; he chose to juggle publishing his first book with getting married and starting a new venture hosting anecdoting.com: a site to share and collect good everyday life stories. Chad works in the library by day at BYU and dabbles in marketing and creative writing services at writcreate.com by night. He lives in beautiful Saratoga Springs, Utah, with his lovely wife. They are enjoying the life of newlyweds and feel like this is just how life was meant to be.

Forced to marry a complete stranger, Sandpiper tries to adjust to life in her new village. But the mysterious Cenote, a great pool of water, has bewitched the men of the village, and Sandpiper must know why. This moving story of romance and redemption serves as an allegory with a timely message. Filled with drama and heart, it's a book you won't soon forget. Published by: Cedar Fort Release date: November 10, 2015

The author, Chelsea Bagley Dyreng, is the daughter of a fireworks salesman and Miss Malibu. She was born in Jackson Hole, Wyoming, earned her BA at Brigham Young University, worked as a librarian for several years, and now lives in North Carolina where she and her husband are raising five God-fearing, book-loving, adventure-seeking kids. Author links: Chelsea Dyreng's blog Chelsea's Facebook fanpage Chelsea on Twitter You can get the book online from the following locations: Amazon.com Barnesandnoble.com booksamillion.com After the November 10th you should be able to find The Cenote at select bookstores throughout Utah and Idaho and on booksandthings.com
- November 21, 2015 No comments: